Well this is embarrassing. A Queensland man has travelled to Kentucky, of fried chicken and fundamentalist fame, and made them look like Stockholm at the Nobel Prize after-party.

Perhaps it’s because Anti-Immigration Minister Scott Morrison is maintaining such a laser-like focus on getting all those Indonesian fishing boats off western Sydney’s freeways that border control somehow slipped up and let Ken Ham out of the country.

I’m sorry, Kentucky. We could have kept him here, you know. We have a large containment facility where we store all of our Ken Hams, a free range Wallyworld we like to call the Sunshine State. I’m not sure how Ham got out of the Queensland high school system where he had been teaching – ahem – science, and made his way to your fair shores, but, sorry about that. 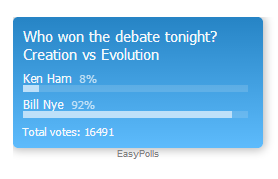 Bill Nye wins hands down with 92% based on this poll on a Christian website!

The creation vs evolution debate between Ken Ham and Bill Nye took place on Feb. 4, 2014 at the Creation Museum’s Legacy Hall in Cincinnati.

The debate was available to view online via live stream. The full debate can be seen below in HD online for free in the Youtube video below for a period of time. It can also be viewed on debatelive.org. 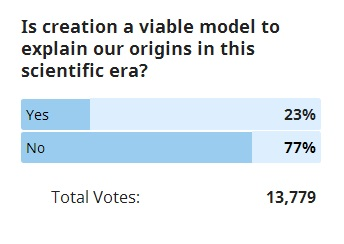 PETERSBURG, Ky. — More than a million viewers are expected to tune in online Tuesday night for what may be the most-watched debate over evolution since the Tennessee “Monkey Trial” of 1925.

Other showdowns between evolution and creationism may have had more impact — for example, the federal court case that went against intelligent-design advocates in 2005. But for pure spectacle, complete with slide presentations, it’s hard to beat the face-off here at the Creation Museum between Bill Nye the Science Guy and creationist Ken Ham.

Editors note: Ken Ham will debate Bill Nye on February 4 at the Creation Museum in Petersburg, Kentucky, with CNN’s Tom Foreman moderating. The debate will be livestreamed at CNN.com at 7 pm ET, and Piers Morgan Live will interview Ham and Nye on Tuesday at 9 ET.

(CNN) – Public debates on evolution and creation have become increasingly rare. Several hundred well-attended debates were held in the 1970s and 1980s, but they have largely dried up in recent decades.

In anticipation of Tuesday’s debate between Creationist Ken Ham and Bill Nye the Science Guy, the Secular Coalition of Australia (SECOA) wants to send a message to Bill:
They’re sorry.
Really, really sorry.

Not from me, but from the Secular Coalition of Australia. It’s hilarious. After the letter there’s an explanation of why it was written. Gotta love those Aussies!

(More on the Nye/Ham debate later.)

Why on earth would Bill Nye the Science Guy agree to debate evolution and creationism in a place called the Creation Museum? And how on Earth could creationist Ken Ham lose?

The conventional wisdom among evolutionary biologists is that they have much more to lose than to gain from Tuesday’s face-off in Kentucky — just as the consensus among creationists is that they’re getting a high-profile forum for their views, nine years after suffering a major defeat in federal court.

11 Tips for Bill Nye Before His Debate Against Creationist Ken Ham
January 29, 2014 By Hemant Mehta

The video below, part of The Atheist Voice series, offers 11 pieces of advice to Bill Nye in anticipation of his upcoming debate against Creationist Ken Ham:

We’d love to hear your thoughts on the project — more videos will be posted soon — and we’d also appreciate your suggestions as to which questions we ought to tackle next!

Twelve days ago anti-creationism activist Zack Kopplin wrote a long piece for Slate about how Texas’s “charter schools” (special schools that are supported by state money), particularly those using the Responsive Education Solutions system, are openly teaching not only creationism (using, of course, materials provided by Responsive Ed), but a grossly distorted right-wing view of history. Have a look at that article to see some egregious examples; suffice it to say these schools teach lies to 17,000 students in 65 schools, and get about $82 million in taxpayer money.

Since “science guy” Bill Nye’s upcoming Feb. 4 debate with anti-evolutionist Ken Ham at the Creation Museum in Petersburg, Ky., was made public a few weeks ago, atheist activists have spoken out fervently against the initiative.

Nye responded to evolutionary biologist Richard Dawkins, among other critics this week, and explained why, despite their frustration, he’s still planning to go head-to-head with Ham.

Bill Nye is set to debate evolution with the founder of Kentucky’s Creation Museum on Feb. 4, and the Science Guy is clear about what he thinks of creationism.

On Jan. 21, Nye talked with HuffPost Live’s Josh Zepps about why he feels so strongly about dispelling the notion that creationism is a reasonable alternative to evolution.

“It’s a deep concern,” Nye said. “If the United States produces a generation of science students who don’t believe in science, that’s troublesome.”

The Richard Dawkins Foundation has criticized the upcoming debate between Creation Museum CEO and President Ken Ham and “The Science Guy” Bill Nye, arguing that such a debate is not worth having and that it only offers credibility to creationism.

“Scientists should not debate creationists. Period,” said an article on the website of the evolutionary biologist and atheist on Thursday, in reference to the Feb. 4, 2014, debate set to take place at the Creation Museum in Kentucky. “Debating creationists offers their position credibility.”

Scientists should not debate creationists. Period. This may sound harsh but let’s start by looking at what sparked this statement. TV personality and science advocate Bill Nye (Bill Nye the Science Guy) has accepted an invitation to debate Ken Ham of Answers in Genesis / The Creation Museum on February 4, 2014 at the Creation Museum in Kentucky.

This is a bad idea and here is why.

The February 4 debate between Bill Nye and Ken Ham at the Creation Museum has generated tremendous interest across America. Online debate tickets for a spot in our 900-seat Legacy Hall sold out in less than two minutes, and coverage in the news media, blogs, and other websites has continued to remain intense.