Just over 10 years ago two bloggers set up a website in Bangladesh called Mukto-Mona, which translates to “Free-thinker” from Bengali. There have long been freethinkers and atheists in Bangladesh, but to this point none had spoken out in such a way.  Mukto-Mona really was a social revolution allowed to take place due to our new globalised technology, the internet.

Since that time many other bloggers added their voices and other Bengali language freethinking sites have been created.  In 2013 an extremist Islamist group called ‘defenders of Islam’ in Bangladesh listed 84 of those freethinking bloggers on a hit list.  Of those 84 named in 2013, 10 bloggers have been brutally killed, 3 others left with serious injuries.  The most recent killing happened Saturday, 31 October 2015.

Madhu M. depicts Bangladeshi bloggers who have been killed since 2013. This picture asks, “Who will be next?”

15 January 2013 – Asif Mohiuddin – stabbed near his office in Dhaka and fortunately survived the attack and has since been jailed in Bangladesh for his views.

An article by jailed atheist blogger Asif Mohiuddin: “Speak, for the cup of hemlock is not yet on your lips”, translated by Mukto-Mona and published by ‘The International Humanist and Ethical Union’ (IHEU), the same organisation who publish the Freedom of Thought Report.

15 February 2013 – Ahmed Rajib Haider – attacked when leaving home in Dhaka, his body so damaged that friends could not recognise him.

7 March 2013 – Sunnyur Rahaman – injured when two men swooped on him and hacked him with machetes.  With the support of local police he was rushed to Dhaka Medical College and Hospital with wounds in his head, neck, right leg and left hand.

15 November 2014 – Shafiul Islam – attacked by several youths on his way home and died after being taken to hospital.  A fundamentalist Islamist militant group named ‘Ansar al Islam Bangladesh-2’ claimed responsibility for the attack.

26 February 2015 – Dr. Avijit Roy – both Avijit and his wife were attacked in Dhaka after attending a book fair.  Avijit died but his wife survived after sustained serious injuries from the machete-wielding assailants.

Rafida Ahmed Bonna is a writer and the wife of the late writer Avijit Roy who was brutally killed by Islamic fundamentalists on 26 February 2015. Here is her video message to the American Atheists Convention 2015.

12 May 2015 – Ananta Bijoy Das – a writter on Mukto-Mona and on the 84 hit list, hacked to death by four masked men in Sylhet, a city in north-east Bangladesh.

Ananta Das was invited by Swedish PEN to discuss the persecution of writers in Bangladesh, but the Swedish government refused him a visa on the basis that he might not return to Bangladesh after his visit.

“Like Raif Badawi, imprisoned and flogged in Saudi Arabia, the brave men who have been murdered are guilty of nothing more than honesty and integrity.”

“Violent jihadis have circulated a list with more than 80 names of free thinkers whom they wish to kill. The public murder of awkward intellectuals is one definition of barbarism.

Governments of the west, and that of Bangladesh, must do much more to defend freedom and to protect lives.”

Andrew Copson and Bonya Ahmed discuss assassinations of humanists on BBC.  Bonya spoke to the BBC’s Sunday Morning Live. BHA Chief Exec Andrew Copson was on the show to add a little context to the plight of non-religious people overseas. 13 countries have a death penalty for atheism and many more punish blasphemy or turn a blind eye to attacks against the non-religious.

There’s more to this recent rise of machete-wielding assailants than just killing – these attackers have created a fear among the masses.  These attackers have threatened all those who sympathizes or even associate with the blogging community.  Rokomari, an online bookstore in Bangladesh, withdrew Dr. Avijit’s books from their store after being threatened by the Islamists.  What was Dr. Avijit writing about?  The first ever book authored by Dr Avijit was titled: “Here comes the wanderer from darkness, with a lamp in his hand” (translated from Bengali) (ISBN : 984 464 124 1).  Here is a review of that book from a Bangladeshi English language newspaper.

Prior to this latest spate of attacks and brutal murders in Bangladesh Taslima Nasreen, an exiled Bangladeshi feminist and atheist writer, took the brunt of the Islamists’ attack for her writings on feminism and religious bias against women in the Muslim world.  Taslima escaped attacks on her life in the late nineties, and she has not been able to return to Bangladesh ever since.  She is as you read this, effectively stateless.

Taslima is a good example of how the education of Muslim girls helps them to develop an independent, critical and skeptical mind.  Taslima seeks to educate the world about the dangers of an extremist form of Islam.

Dr. Humayun Azad is a great icon of the atheist movement in Bangladesh, a professor of linguistics and literature, whose books changed the lives of many. His book, “My disbeliefs”, is a landmark in the history of Bangla publication on the subject of atheism and religious extremism.

On 27 February 2004 Dr. Humayun Azad became the victim of a vicious assassination attempt by assailants near the campus of the University of Dhaka during the annual Bangla Academy book fair, they very book fair where Dr Avijit Roy and Rafida Ahmed were attacked.  A week prior to Azad’s assault, Delwar Hossain Sayeedi, one of the renowned religious leaders of Bangladesh demanded, in the parliament, that Azad’s political satire Pak Sar Jamin Sad Bad would be banned and demanded the introduction of the Blasphemy Act on the author.  Later, sources from an Al-Quaeda off-shoot Jama’atul Mujahideen Bangladesh (JMB) admitted to the police that they attacked Dr Azad.

Dr. Humayun Azad son, Ananya Azad, is also now named the infamous list of 84.  Ananya recently relocated to Germany and had the chance to speak to a TV channel about his journey.  This interview can be viewed on Facebook.

What is at stake?  Who is at risk?

Islamists are not only a threat to secularist, freethinkers and atheists, but also to ethnic and religious minorities, to feminists and to democratic values.  These extremists are fighting to overturn democracy in Bangladesh and establish a shariah state. 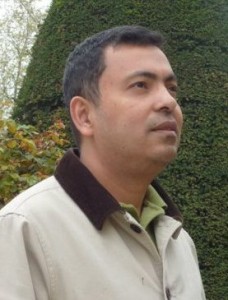 A second Sydney (Australia) protest has been held calling for justice for Avijit Roy.