A speech given by the Right Reverend Dr Peter Hollingworth at Victoria University College of Law and Justice on September 10 was the first of a series of four tapping into the vast experience of eminent Australians who have served as Governor-General of Australia.

Dr Hollingworth set in context much of the good that churches and other civil society institutions can play, and the ongoing challenges they face. He didn’t shy away from the damage that can be done in the name of religion either.

OF THE 105,000 homeless people in Australia, a staggering 42 per cent are aged 12-25. Some have had to leave repressive or violent home lives because of their sexuality or gender confusion.

Tim is one such young person. At 16 years old, he was kicked out of his family home in Melbourne earlier this year after his religious parents discovered he was gay.

He spent his first night sleeping under a tree, in the middle of Melbourne autumn. He then stayed with friends until ultimately he was forced to sleep on the street.

Australia has a relatively strong health system by international standards, but it needs a makeover. To generate fresh ideas, The Conversation is profiling five international health systems that have important lessons – good and bad – to pull Australia out of its health reform black hole.

Norway and Sweden remind us of a vision we have lost: the economic benefit of a strong, single national health insurer.

Coalition plans to cut welfare for those named as terrorism backers in Australia
theguardian.com, Saturday 16 August 2014

Suspected Australian terror supporters would have their unemployment benefits and other welfare payments cut off, under new legislation proposed by the Coalition.

Tony Abbott said the legislation would allow the Department of Human Services to cancel benefits to those assessed as a serious threat to national security.

“These new measures will ensure Australian taxpayers are not financing people known to be members of, or working with, terrorist organisations,” the prime minister said in a statement on Saturday.

Sydney jihadist Khaled Sharrouf’s mental health issues were left untreated for almost all of his four-year incarceration and would only have worsened while he was in jail for terrorism offences, the psychiatrist who treated him says.

A shocking failure in service provision left Mr Sharrouf languishing in jail until just before his release in 2009 and exacerbated the mental issues that a judge said drove him to radical Islam.

The opening of eight new medical schools in Australia in the past decade has seen a massive increase in the number of new doctors entering the workforce. The number of new junior doctors graduating in Australia doubled between 2004 and 2011. But while fears of an overall shortage of doctors seem assuaged, we don’t have the right mix of doctors.

A recent trend is the increasing specialisation of the medical workforce. In 1999, 45% of Australian doctors were general practitioners (GPs) but this proportion had fallen to 38% by 2009. Similar trends can be observed in the United States and United Kingdom.

Over- and under-servicing: further reasons to scrap the GP co-payment
7 August 2014 | Simon Eckermann | Professor of Health Economics at University of Wollongong

Treasurer Joe Hockey is struggling to sell his co-payment policy to the Senate and the Australian public – and it’s easy to see why.

Charging patients $7 for GP, pathology and diagnostic services that are currently bulk billed would not only reduce access to care for the most vulnerable patients, it’s likely to increase costs elsewhere in the health system and lead to poorer patient outcomes.

As I argue in the latest issue of the Australian New Zealand Journal of Public Health, while mandatory co-payments lead to under-servicing of those who can’t afford to pay, they also provide GPs with incentives to over-service those who can.

Record numbers of Australians are sleeping rough as concerns about global inequality rise. Michael Green reports on the growing gap between rich and poor.

The room was already full at Trades Hall in Carlton on a cold July night, but the floors creaked with people still walking in. ”I’m not Thomas Piketty,” said Mike Berry, emeritus professor at RMIT, with a wry smile. ”I understand some of you were expecting him.”

Piketty, the French economist and author of the best-selling tome, Capital in the Twenty-First Century, is in great demand – and short supply. Translated from French this year, his 685-page book sold out all over the English-speaking world. It is already the all-time best-selling book for its publisher, Harvard University Press, which ran 24-hour shifts at its warehouse to keep up with orders.

The prime object of welfare reform should be to increase the well-being of people rather to reduce public expenditure. Good policy should be able to achieve both goals over the longer term. Too many current proposals, however, are likely to cause damage that increases costs and affects social cohesion.

Proposed policies in the budget and McClure report that focus on cutting income support or tightly controlling recipients’ spending are highly unlikely to achieve either of the above goals. Instead, they will create a subgroup of people with no income and/or suffering further stigma because they are denied control over basic decisions.

The government’s proposed Medicare co-payment and its increase in the pharmaceutical benefits scheme threshold will send a bigger-than-anticipated price signal, according to a study by Sydney University general practice researchers.

If both policies were introduced, the average annual extra cost to a patient, which increases with age, would be A$36 for children up to $122 for people 65 and older.

A young family of four would expect to pay $170 in co-payments for GP visits and tests, plus $14 for medications – $184 more annually.

Jobseekers can’t be choosers, Tony Abbott declares
MAY 24, 2014 | The Australian

TONY Abbott says jobseekers on unemployment benefits have no right to reject work just because they can’t find their dream job.

Thousands of unemployed people under 30 will be forced to work for the dole from 2015 under the government’s new budget measures.

They will also be required to wait at least six months before getting welfare.

Mr Abbott said jobseekers should not have the option of rejecting available jobs, because the alternative would be a life on welfare.

Australia has a jobs crisis rather than a welfare crisis, according to the Salvation Army’s Economic and Social Impact Survey of nearly 2500 clients.

Current job search and employment service programs are having “little impact on those with significant disadvantage”, its report said.

With respondents overwhelmingly unemployed and on income support the survey found disability and health problems, caring responsibilities, and limited resources for education or job searching “all appear to impede respondents’ ability to gain sustainable employment.

A director of the state’s foster care association has been forced to resign after members expressed concern that an offensive blog post she had written would hurt a push for more gay and Muslim carers.

Volunteer religious instructor Karen Dobby triggered controversy after claiming in a blog post that society promoted homosexuality in young people “by making it sound ‘normal’ rather than encouraging them to fight against early thoughts of same-sex attractions”.

Ms Dobby, an Access Ministries religious instructor at Antonio Park Primary School and political candidate for the Australian Christians party, also praised converts to Christianity for “standing up and fighting against the infiltration of the Islamic culture”.

The Work for the Dole program could again become a core element of welfare policy for the unemployed in Australia, but there is a considerable body of evidence which shows it is unlikely to help people find jobs.

While this week’s announcement by Assistant Minister for Employment Luke Hartsuyker was sketchy in detail, from what has been said so far, it seems that the details of the program will remain similar to when it was first introduced in the late 1990s. The government will provide funding for short-term job placements in the community sector that will be required to be taken up by Newstart payment recipients whose unemployment spell reaches a threshhold length. 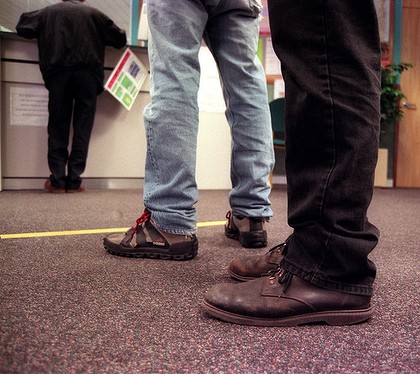 Social services minister Kevin Andrews has targeted the Disability Support Pension and Newstart, the main payment for the unemployed, for reform, branding the current level of welfare as unsustainable.

But the idea that growing numbers on Newstart are providing relentless pressure on the federal budget is not supported by the data in the annual Statistical Report that Andrews referred to when calling for reform.

Talk this week about potential changes to the welfare system has focused on the DSP as a key area in need of reform. The DSP is a welfare benefit made to people with a physical, intellectual or psychiatric disability, who are assessed as being not able to work more than 15 hours per week, and who meet a number of other eligibility criteria including having accessed supports such as the Disability Employment Service.