There are a number of organisations who are working towards stopping government funding of Chaplains in our public schools.  When Chaplains express beliefs such as “being LGBTI is a sin” or “non-Christians will go to hell”, we don’t believe that the government should be funding them to ‘counsel’ young Australians as part of a government funded secular education system.

Ron Williams has taken the illegal federal funding of the National School Chaplaincy Program to the High Court twice and won both times.  Yet the federal government persist in funding the program.

We encourage you to write to your local member of parliament and;
1. call for a Senate Inquiry and;
2. ask the states and territories to refuse the Chaplaincy program funding.

Some of the initiators of this illegally funded, unconstitutional and anti-secular program are still in parliament:

You can send an email to Tony Abbott, Julie Bishop, Greg Hunt and Andrew Laming to express your concerns about their program.

Birth of the National School Chaplaincy Program
The National School Chaplaincy Program was launched in September 2006 by the Howard Government.  In June 2006 The Age reported that “a full-time chaplain would cost schools about $70,000 a year to provide.”  John Howard told the ABC that “students need the guidance of chaplains, rather than just counsellors.”

“… since the commencement of the NSCP in 2007, previous federal governments have already outsourced the provision of school chaplaincy to organisations whose extreme evangelical worldviews do not reflect those of even the majority of Australian Christians, let alone the 40% or so of our citizenry who are either non-religious, or adherents of other faiths
Subsequently, students are increasingly at risk of being exposed to an uncompromising, fundamentalist ideology …”
“https://www.facebook.com/SecularCoalitionOfAustralia/ target=” – Jaye Christie & Rod Bower – Article no longer available
In November 2013 The Courier Mail reported that “Queensland school chaplains’ job description includes converting students to Christianity, but education department says they can’t.”

Kevin Rudd followed Howard by enthusiastically continuing to fund the National School Chaplaincy stating that the first 3 years of the program had provided funding to 2,700 schools in Australia.

When in office, Julia Gillard expanded the NSCP to include an additional 1,000 schools and extended the terms of the program to include secular welfare counsellors.

In June 2012 the federal government funded at least 160 providers of school chaplaincy and welfare counsellors in schools around Australia.
Here are 6 of the major providers of School Chaplaincy in Australia: 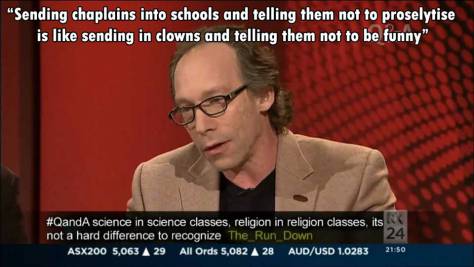 The High Court Challenge
In August 2011, Ron Williams challenged the constitutional legitimacy of the National School Chaplaincy Program in the High Court of Australia.
On the 20th June 2012 a decision of six to one in favour was handed down by the full bench.

The Government had violated the Australian Constitution.

“The High Court decision that government funding of chaplaincy in Queensland schools is invalid is only “a technicality” and will not mean the end of the program.”
Jim Wallace, head of the Australian Christian Lobby

The Federal Government at the time were only too keen to find a legislative ‘cure‘ to the High Court decision, which was found only 5 days after the high court decision was handed down.  The National School Chaplaincy Program would remain.

The Federal Government were determined to undermine the legal battle fought to regain secular schooling.

“This Bill, in a bald-faced manner, rejects the fundamental propositions put by the High Court in the Williams case.
The Commonwealth is clearly asking for another clobbering by the Court.”
Senator George Brandis

In August 2013 Ron Williams launched his second case against the National School Chaplaincy Program.  All six states support the high court decision against school chaplaincy and disagree with the federal government measures to continue the program.  This second high court challenge was heard in Canberra in May 2014.

Secular Welfare Funding Removed – Chaplains ONLY
The recent federal government budget, May 2014, has brought more bad news for secular schooling in Australia announcing that secular welfare counsellors will no longer be funded by the National School Chaplaincy Program, that the Howard government plans were originally to provide Chaplains to schools – not secular welfare workers.

“Education Minister Christopher Pyne revealed Tuesday that a total of $243.8 million will be made available over four years for around 2900 schools to engage a chaplain.”
Christian Today

Gay News Network highlights the particular concern for LGBTQI school students who may want to seek out counselling during their school years.

CHAPLAINCY PROGRAM TO FUND GROUPS WITH LINKS TO HOMOPHOBIA
James Findlay, Rachel Cook
“Several organisations running chaplaincy programs in Australian schools have connections to homophobic campaigning and will benefit from the funding allocated in the Government’s proposed budget, MCV has revealed.”

“Tony Abbott’s Coalition has allocated nearly $250 million to Chaplaincy Programs over four years in the latest budget, which offers schools up to $24,000 per year to pay for a chaplain approximately two days a week.”

“ACCESS Ministries is one of the providers of chaplains in Victoria, providing approximately 330 schools with Special Religious Instructors, and came under scrutiny in February when it was revealed one of their educators was distributing homophobic materials.”

For LGBTQI school students who are being bullied the last thing they need is to be ‘counselled’ by a homophobic chaplain who says that being gay is a disease and you need to be cured.

“Scott Hedges, co-founder of Fairness in Religions in School, said the push to protect gay pupils, who are up to six times more likely to contemplate suicide than their straight peers, was irreconcilable with the chaplaincy scheme.”
Jill Stark