In Australia, the voluntary assisted dying with dignity battle is happening in a few states and territories but this week the focus is currently on Victoria.

On Friday, 3rd November 2017, the Legislative Council voted to continue debating the VAD Bill and will consider amendments in 10 days.

Voluntary assisted dying with dignity has been dogmatically and vehemently opposed by the religious right in Australia for decades.

The religious-right is always fighting a campaign to replace people’s individual secular rights and freedoms with the religious-right’s religious ones.
For example, in Australia in 1997, the Catholic Church got the Northern Territory’s voluntary euthanasia laws over-ruled by the Australian federal government.
en.wikipedia.org/wiki/Euthanasia_in_Australia#Northern_Territory

In October, the Victorian government introduced voluntary assisted dying with dignity legislation for Victoria into the the Victorian lower house (Legislative Assembly) where it was debated for many hours and eventually passed.
But the religious-right has been running a huge, vigorous attack campaign for all of 2017.
They were especially targeting the MP’s in 10 or more marginal electorates of the Legislative Assembly.
Now they are targeting members of the Legislative Council.

The Progressive Atheists Inc. believe people have a human right to end their life with dignity and not be forced to suffer in pain, forced to be bedridden or forced to die alone without saying goodbye.

Voluntary assisted dying with dignity laws have successfully been enacted in nations, states and provinces around the world.

Everyone who supports this basic human right to have a peaceful, dignified death, in the company of who they choose, should tell their local MP’s to support the legislation.
All Victorian residents live in one of the eight Legislative Council regions, each with five members of the L.C. (a total of 40 MLC’s).

We are also asking for volunteers who have time to assist with the campaign and/or people who can assist with a donation.

On Friday, 3rd November 2017, the Legislative Assembly voted to continue debating the VAD Bill and will consider amendments in 10 days.

Today (3rd November 2017), debate on the ‘Voluntary Assisted Dying Bill 2017’ has continued in the Victorian upper house (Legislative Council).
The Legislative Council decision will be the final decision of a process that has taken a couple of years since a public inquiry was held into ‘End of Life Choices’.

A vote is anticipated today, maybe around 4pm.
It is the ‘second reading’ of the bill therefore a ‘no’ vote will end debate but a ‘yes’ vote means that debate will continuue later this month on amendments for a final vote.

Today (2nd November 2017), debate on the ‘Voluntary Assisted Dying Bill 2017’ commenced in the Victorian upper house (Legislative Council).
The Legislative Council decision will be the final decision of a process that has taken a couple of years since a public inquiry was held into ‘End of Life Choices’.

The Marriage Equality Campaign has Mobilised the Religious-Right

In a speech in the USA, Tony Abbott has confirmed the fears of Australian secularists that the religious-right are using the same sex marriage debate to strengthen their opposition to Australian secular values.
He gave substance to the size of the ‘no’ campaign: it consists of an alliance of 80 organisatons; has raised over $6m from more than 20,000 separate donors and fielded more than 5,000 volunteers to doorknock & phone canvass.
He has admitted, (or rather boasted) that the ‘no’ campaign would go on to form the nucleus of a lobbying organisation that could represent 40% of Australians and become a counterweight to the campaign organisation GetUp.
He gave as example the religious-right’s opposition to assisted dying with dignity laws that are currently being vehemently opposed by the religious-right in Victoria.
He made a threat that the religious-right would campaign for change in the Liberal Party and/or support a minor party (the Australian Conservatives) to have the balance of power in government. 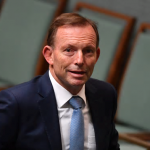 See also the opinion piece by James Campbell in the Herald Sun two months ago, warning of exactly that.

The religious right in Australia has moved up to a new, higher, more dangerous level of power by combining the forces of 80 religious organisations and a their databases of between one to maybe over three million voters.
They have created the Coalition for Marriage (C4M).
Their strategy is to use this organisation to form the nucleus of a right-wing alternative to the left-wing Get Up!

James Campbell (National Politics Editor for News Corp) sounds the warning,
“Whether the hopes of the people behind the C4M are realised remains to be seen of course.
Evangelical Christianity in Australia is not the potent force it is in America.
But make no mistake, they’re using this vote to have a red-hot go.”