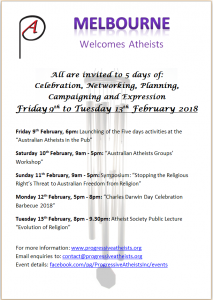 All Atheists are invited to 5 days of celebration, networking, planning, campaigning and expression.

Each event is seperate and run by one or more organisations.
As usual, some Facebook and Meetup events may be created by people other than the organisers.
Please assist the organisers by RSVP’ing ‘going’ or ‘interested’ to the Facebook events.
And please share and invite your friends.

More events will be added later but the first five are:
Friday 9th February, 6pm – late:
Launching of the Five days activities at the “Australian Atheists in the Pub”
The pub is open from 11am for those who wish to come earlier.
facebook.com/events/497714693935601

Monday 12th February, 5pm – 8pm:
“Charles Darwin Day Celebration Barbecue 2018”
Some Atheists (especially those flying out later in the day) will be there from breakfast time.
facebook.com/events/1992415680973137

For email enquiries please use our contact page.
PDF flyer for printing.
Image of flyer to share.