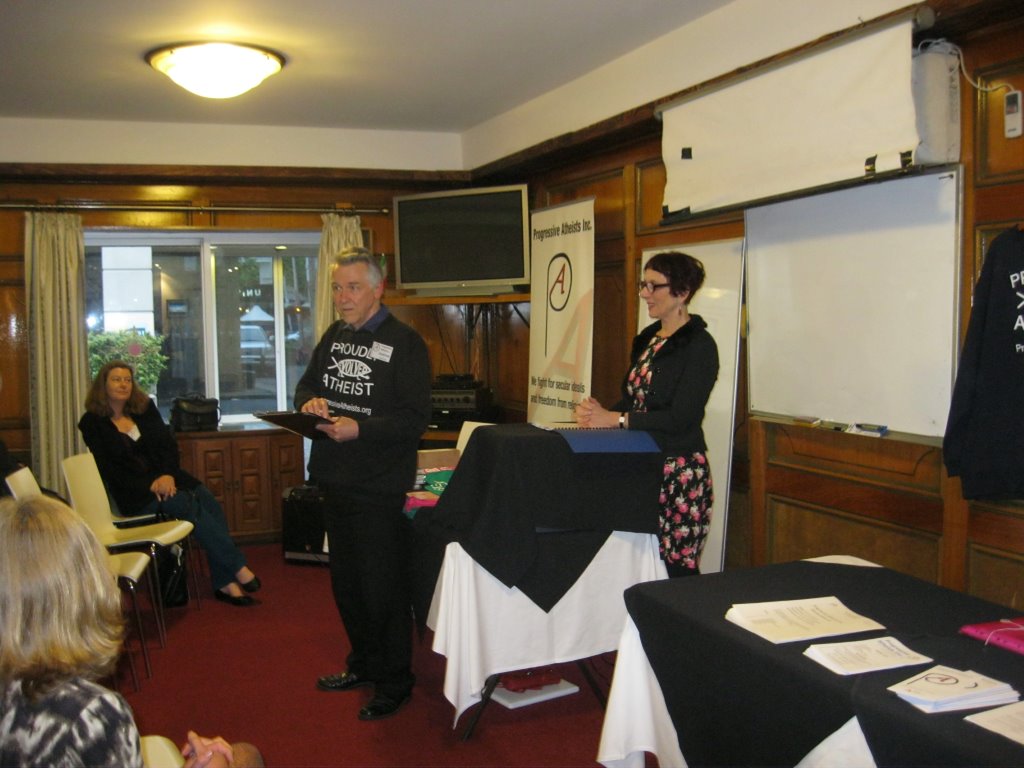 We wish to thank all members and Committee members for their hard work and positive activism to bring together Progressive Atheists Inc. and help us promote secular ideals and freedom from religion.

We want to express our gratitude to all those who have given their free time to build up and maintain the organisation throughout the year. From making Progressive Atheists accessible to the community through attending and hosting MeetUp’s, informing the community of new and current events, projects and campaigns; and creating the space for freethinkers to interact either on the ground or on the net.

The Progressive Atheists aims to act in solidarity with other progressive movements, organisations and groups that share our commitment to voicing issues affecting women, minorities, people with disabilities, gays and lesbians, seniors, youth and the environment; 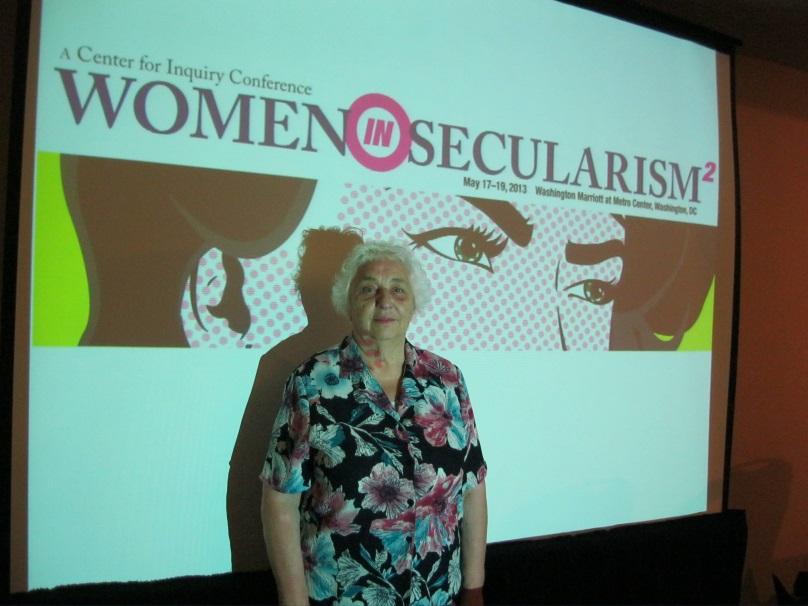 The Progressive Atheists Inc. is a thriving and dynamic community. With only a few willing hands the PA has has managed to host events that have gained worldwide coverage and interest. Easter Zombie Sunday for example looks set to take the world by storm – an event that was the brain child of our very own Elida Radig.

Here is a list of the Events either initiated or included participation from the Progressive Atheists:

In November 2013 our President Andrew Rawlings was moved by a request from Leo Igwe of the Humanist movement to act in response to an upcoming Evangelical Tour of Australia by a Church who had a reputation for promoting superstitious beliefs surrounding witchcraft and vilification of the LGBTQI community.

A petition to prevent the tour access to Australia was drafted, published and shared. The petition grew quickly to over 900 signatories. Follow up letters to politicians were sent and a response was received from the high commission of Australia. They were unable to do anything to prevent Pastor Enoch Adeboye from entering Australia.

Support was given via a Facebook Group to organisations and groups in cities around Australia and the Pacific. Action was taken in Fiji to promote awareness. Action in PNG was limited do to local laws. The Sydney Atheists, Humanist Society of WA and UWA Atheist & Skeptic Society were able to host protest events in Sydney and Perth. All parties contributed to the production of a leaflet to hand out to attendees of the events in an effort to raise awareness and education regarding the potential harms of superstitious thinking. 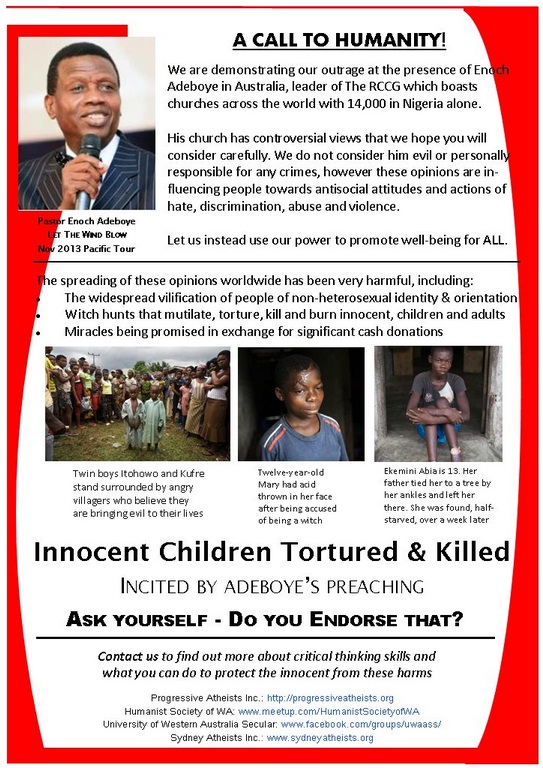 A United Front to Promote Secularism

Progressive Atheists mission and purpose includes the point ‘to improve communication among progressive groups and organisations in our community in order to galvanise a united front for promoting secularism.’

In June 2013 the Secular Coalition of Australia and New Zealand was formed. Originally the name chosen was SCANZ and has since been renamed SECOA. A committee has been formed, a website developed and a mission and purpose drafted.

In June 2013 member Elida Radig was elected to fill a vacant position on the board of Atheists Alliance International (AAI) of which the Progressive Atheists are a proud member. Our ties with AAI are to be built upon and strengthened in an effort to contribute to the global movement of atheists seeking to affect a progressive social transformation within their local communities.

The website got so much traffic that our Technical Support Officer – Brian was brought in to organise a new server and a larger usage quota for all our extra traffic and content.

Work has continued in developing and setting up our Branches around Australia overseen by our Branch Coordinator Elida Radig.

This year Brian worked hard to bring us our own unique PA design for our T-Shirts and Windcheaters which includes a very well designed Darwin Fish with hands and a comprehensive list of our shared values on the back.

Committee members were instrumental in taking up an offer by Author and Founder of Recovering from Religion Darrel Ray to organise an event in Melbourne during his tour. A dinner was arranged with representative members from a number of Freethought groups in Victoria.

Progressive Atheists were approached by the Sly Rat Theatre Company to promote their production ‘The Martyrs’. A narrative on the influence of Evangelical Churches, sexuality, lies and hypocrisy.

We have seen further development of a team and strategies on how atheists can help the homeless as a secular alternative to help provided by religious groups.

Child Abuse of all forms is of great concern and cause of distress. The Progressive Atheists have worked all year in all available ways in order to gain justice for those who have survived abuse in religious and government institutions across Australia.

The talk by Judy Courtin our guest speaker at our AGM regarding the Royal Commission and the Catholic Church will be made available via our YouTube account in due course.

Judy noted at the end of her talk that the next step is to change the laws in order that survivors of abuse are able to sue respective organisations via their property trusts.

Letters to the Editor

Numerous letters and articles have been published in newspapers in Australia sent in by members of Progressive Atheists. This reflects our push for grassroots action to fight for secular ideals and freedom from religion.

Thanks for reading and please share your thoughts / comments / ideas with us!